It is the pride of the rich cuisine of Naples. And can move Neapolitans to tears! It’s traditionally served over pasta. Pasta Sauce (Ragù alla Napoletana) origins lie among the upper middle classes, not the country folk. It’s enriched with two kinds of meat. It is a dish for feast days and holidays. And for weddings and special occasions. 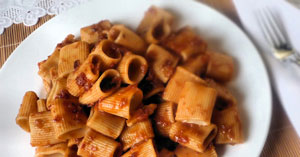 It may be further enriched with the addition of unseasoned butcher’s knife-chopped pork sausages. And large beef and pork skin rolls bound up with string. After being filled with chopped parsley, garlic, pine nuts, raisins and cheese shavings. A truly magnificent feast! 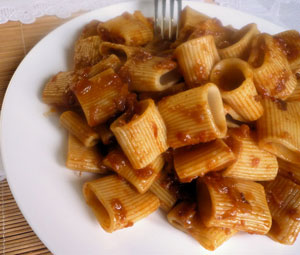 This sumptuous pasta sauce needs a good chunky pasta to do it justice.  Use it to crown a large format tube pasta like Paccheri, Rigatoni or Mezze Maniche. Never use pasta like Spaghetti or Fettuccine. The  meats you return to the pasta sauce to re-heat. Then you keep them warm while eating the pasta. And serve as the second course along with poached broccoli or other seasonal vegetables. But never eat potatoes after pasta.

To serve in the traditional manner: place about half the pasta sauce in a separate small pan. Keep both sauces warm while you cook about 2 ½ cups pasta very “al dente”. The pasta is going to continue cooking while you toss and mix, while people are being served, and even on each diner’s plate. As soon as the pasta is ready, drain the pasta and immediately mix with the pasta sauce in the original cooking pot. Pile the pasta sauce into a beautiful wide and shallow bowl and pour a couple of ladles of the extra sauce on top of the pasta. Place a chunk of good aged Pecorino or Parmigiano-Reggiano for diners to grate onto their plate, if they wish. Any extra pasta sauce may be placed in a small bowl with a ladle for diners to add to their pasta. Or else it may be diluted with some hot water and poured over the second course meats. Serve the pasta at once — to rounds of applause!

Carmelita Caruana runs the Cook Italy Cooking School based in Bologna, Italy. An Italian food expert and culinary consultant, her writing has been featured in major British newspapers and food magazines. Carmelita has appeared on British TV and held classes in various U.S. cities.