“Most Italians would pull a face at the very thought of spaghetti and meatballs. For at best this combination makes no sense.”

Spaghetti and sauce should come together in one mouthful. And large meatballs, as well as Bolognese ragù, should slip and slide off the slippery cylindrical spaghetti. 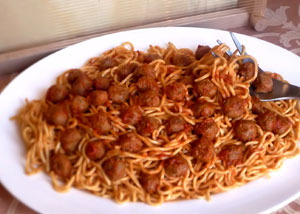 In Abruzzo, the hand made Spaghetti alla Chitarra are not cylindrical. They’re square in the cross section. The Chitarra (Italian for guitar) is a special kitchen tool. It has strings pulled tautly across a wooden frame. The spaghetti dough is rolled out as high as the space between the strings. Then it’s cut on the Chitarra. They’re about a dime and a half thick. And the meatballs, called “Pallotte” in dialect, are tiny. No bigger than a hazel nut (filbert). Made this way, this spaghetti and meatballs works. And the spaghetti, sauce and meatballs combine in a single tasty mouthful as they should. 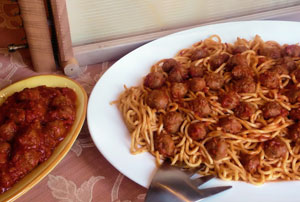 Here’s the ingredients to make your own spaghetti dough for this recipe. 4 ½ cups semolina flour, 4 eggs, 1 tbsp of olive oil, and a little warm water. More if the dough needs it. Leave the dough to rest in a plastic bag for 30 minutes. And after cutting the noodles, place them on clean cloths. Then leave on a natural woven basket to dry for about an hour.

For the Spaghetti Sauce recipe you need:

For special occasions, you can modify this spaghetti recipe. Cook diced lamb and crumbled pork sausage in the sauce for 2 to 3 hours.

For the Meatballs recipe you need:

In summer, prepare the spaghetti sauce recipe using fresh vine ripened tomatoes. The sauce recipe can be made ahead and frozen.

To Serve the spaghetti and meatballs:

So, there you have it. The best and most authentic spaghetti and meatballs recipe on the web! Enjoy!

Carmelita Caruana runs the Cook Italy Cooking School based in Bologna, Italy.  An Italian food expert and culinary consultant, her writing has been featured in major British newspapers and food magazines. Carmelita has appeared on British TV and held classes in various U.S. cities.

5 thoughts on “Spaghetti and Meatballs Recipe”